The Sanctuary of Lourdes is suggesting as a pastoral theme the words that Mary, the Mother of God, entrusted to Bernadette Soubirous on 2nd March 1858: “Go tell the priests to build a chapel here and that people should come in procession.”
Taking into account the content and the richness of these words and so as to make them more easily digestible for the pilgrims, they will be presented in three stages:

In the text below, we will be focusing on
“Go and tell the priests …” And one of the keys to helping us make these words of Mary our own is essentially pastoral.

Indeed, when it comes to understanding the person of the Virgin Mary, we are all invited to turn to the teaching of the Church. However, when it comes to loving the Mother of God, we must turn to the experience of the holy and faithful People of God: the pilgrims themselves, and among them, par excellence, Bernadette Soubirous.

This also applies to priests. To understand who the priest is, we must turn to the teaching of the church. But, to love priests, we must contemplate the Mother of Jesus and the holy and faithful People of God. And, to love the priests of Lourdes, we are invited to make the experience of Bernadette our own.

Presentation of the theme of the year 2022

Recommendations for putting the 2022 theme into practice

Recommendations for reviewing your pilgrimage

On 2nd March 1858, 1,650 people were gathered at the Grotto, before Bernadette even arrived. As soon as she arrived, Bernadette knelt down and, holding a candle in her hand, she slowly made a large sign of the Cross, then recited her rosary. Very quickly, her face lit up, proof that the Lady was there. At the end of the rosary, Bernadette performed the penitential gestures that the Lady had taught her. She kissed the ground as a sign of penance for sinners. Moving on her knees, she went to the spring, to drink and wash. Bernadette performed these gestures with reverence and her face was sad, but she also performed them slowly, as the many people inside the Grotto slowed her progress.

Soon after, her face lit up and, although she remained still, everyone understood that the Lady was there. And like a mother and her daughter, they shared a time of intimacy. Once this intimacy had made the meeting possible, finally there came the time of catechesis, teaching and even mission. This is how on Tuesday 2nd March 1858, the Lady asked Bernadette to,

“Go and tell the priests to build a chapel here and that people should come in procession.”

During the 3rd apparition, Bernadette had received and accepted an invitation from the Lady: “Would you do me the honour of coming here for fifteen days?” And now during this, the 13th apparition, this personal, intimate although demanding dialogue, which was full of politeness, tenderness, and affection, was opened up to the whole Church, to the whole of humanity. Bernadette had just received, for the first time in her life, a mission that concerned other people: “Go and tell …”

Ever since the 1st apparition, Bernadette had been confronted with numerous obstacles that she had to overcome. But her “mission” was undoubtedly what proved most difficult for her to accomplish. She left the Grotto, but did not go directly to the Cachot find her parents. Instead, accompanied by two of her aunts, Bernadette went to the Lourdes presbytery, to see the priest of Lourdes, Father Peyramale.

It was a difficult time for her. Firstly, because it was the first time that she had met this man of impressive stature, but also because the reception the priest gave to Aunt Bernarde, Aunt Basile and Bernadette was far from warm.

Intimidated, Bernadette became a little flustered. To the extent that when she was leaving the priest’s house, she realised that she had forgotten part of the request. Bernadette did not ask her aunts to accompany her when she returned to the parish priest, but instead went to the parish sacristan, Dominiquette Cazenave, to arrange a meeting with the priest. It was on the evening of 2nd March, that told Father Peyramale her message: “Go and tell the priests to build a chapel here and that people should come in procession.” Bernadette left the presbytery radiant, and confided to Dominiquette, “I am very happy, I have done my errand.”


The messenger was undeniably weak, but it was because she passed on the message that we, too, can be at the Grotto of Lourdes today. 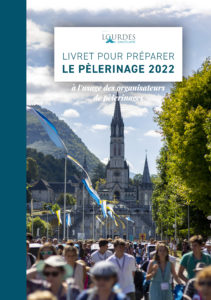