Georges-Fernand Dunot of Saint-Maclou (1828-1891) laid the foundation of the Bureau of Medical Observations in Lourdes in 1883, thus contributing to the dialogue between science and religion. Father Andrea Brustolon-Glatz, Oblate of the Virgin Mary, wrote a book on the doctor’s work. Now he is publishing a summary in the form of a booklet (48 pages), entitled “Georges-Fermand Dunot de Saint-Maclou, the doctor of the Grotto of Lourdes, a bridge between Science and Faith” *.
* Published by VELAR editions, 4 €, available as of now in English, French and Italian from the Sanctuary bookshop..

This booklet summarises the work of the founder of the Bureau of Medical Observations and Hospitality of Our Lady of Lourdes, nicknamed “the doctor of the Grotto of Lourdes”. He devoted his whole life to building a bridge between reason and faith. 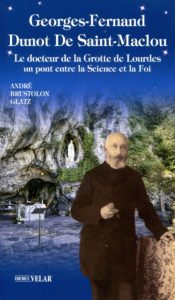 A life focused on others

Dr. Dunot de Saint-Maclou, born in Ouézy, Calvados, lived all his life looking after other people, the poor, the Church, as his mission. As the health of his wife, Marie-Sidonie, worsened, he deemed it appropriate to leave Normandy to settle in Nice for its more favourable climate. He founded the St. Vincent de Paul Conferences which have helped many needy people. In 1874, a couple of friends moved to Lourdes and also founded a St. Vincent de Paul Conference. The doctor travelled there to participate in their meetings. In 1877, the health of his wife became so critical that his only hope seemed to be divine intervention. At the insistence of Marie-Sidonie, the couple went to Lourdes. However, his wife’s condition worsened. She received the sacraments from Father Peyramale. Father Rémi Sempé was with her when, on the evening of 26th August, she surrendered her soul to God. 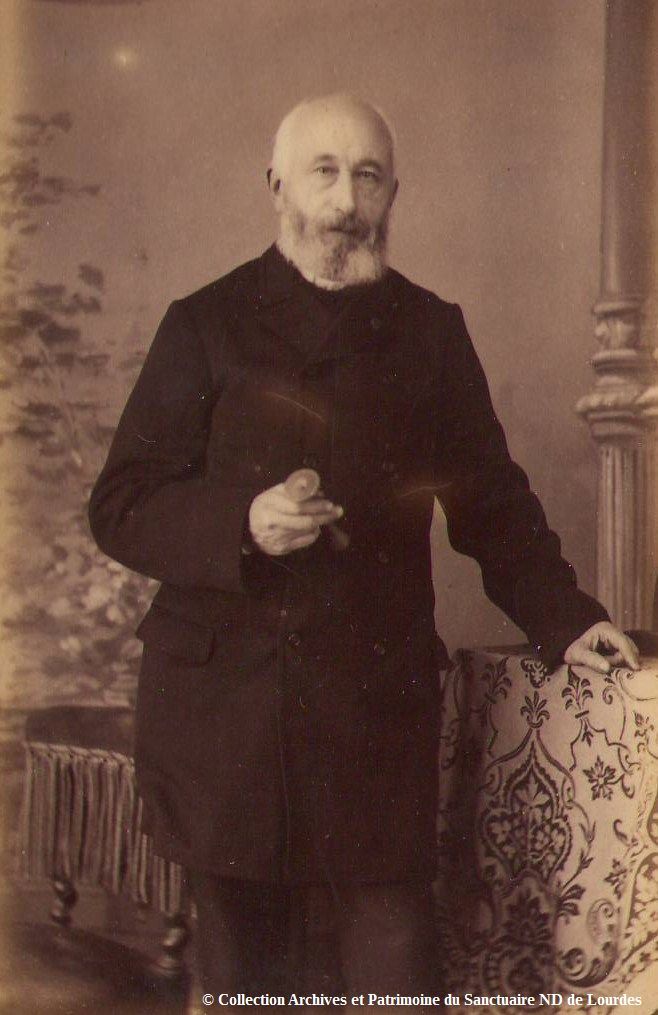 Mary becomes the lady of her heart

Back in Nice, Dunot asked to join the Oblates of the Virgin Mary. He paid his board and lodging and supported the community by caring for the sick and giving French lessons to seminarians. In his daily prayers, the Mother of God had a place of honour. Mary became the lady of his heart.

The call of Lourdes

At the request of his Vincentian friends, from 1879, Dunot began to go to Lourdes every summer. On 19th August 1881, the first Hospitallers’ Committee was formed. Its members referred to themselves as Knights Hospitallers of Saint John (Order of Malta). It became necessary to offer Lourdes a service for the sick, especially for the poorest. On 25th February 1883, among the nine names of the Hospitaller Committee of Lourdes, appeared that of Baron Dunot of Saint-Maclou, serving at the Grotto. Now that pilgrims were being made welcome in an appropriate way, the focus turned to controlling the risk of fanatics, especially surrounding the spring, who would immediately claim a miracle at the merest suggestion of an improvement in well-being.

1883 : Establishment of the Office of Medical Observations

Between 1860 and 1883, verification of the alleged cures was carried out in the parlour of the chapelains’ residence. The priests sent the testimonies to doctor Henri Vergez (1814-1888), who had been appointed by Mgr. Bertrand-Sévère Laurence (1790-1870), bishop of Tarbes (1845-1870), to the commission which, from 1858 to 1860, examined the facts of Lourdes and the apparitions. In 1883, as director of the Grotto, Dr. Dunot worked with the chapelains to take statements and meet those who declared themselves cured, in two nearby rooms furnished by the same people who had built the Rosary Basilica. The doctor divided his time between the Grotto and the Bureau of Medical Observations. He was already working out what should be done to help the hospitallers. Father Rémi Sempé understood that his skills were exceptional. Bishop Billère, bishop of Tarbes, held him in high esteem him and offered him the opportunity to stay in Lourdes throughout the pilgrimage season. Baron Dunot of Saint-Maclou accepted, because he felt this new role to be a call from the Virgin. He moved to the Missionaries of the Immaculate Conception in Lourdes, near the Grotto, not far from the Baths. He founded the Bureau of Medical Observations in 1883. During his presidency, an average of fifty cases per year were examined before a growing number of doctors. From 1883 to 1884, Dunot considered the organisation of a service for the hospitality. Thanks to his methods, Dr. Dunot de Saint-Maclou saved Lourdes from mass frenzy. He helped to differentiate between a grace and a miracle which is characterised by immediacy and the absence of any scientific explanation. The healing of a psychosomatic illness, for example, may be a grace, because the person found the strength and courage to free themselves from what had caused their illness.

The Hospitality of Our Lady of Lourdes

The other difficulty at the Grotto of Massabielle was organising the volunteers. Pilgrims, especially the poorest, who would have benefitted from a hospitality service were coming more and more throughout the pilgrimage season. The Standing Committee of the Hospitality of Our Lady of Lourdes – including Dr. Dunot among its 9 members – was already offering its services at the train station, in the Accueils, at the Grotto and at the Baths. It was a branch of the Hospitality of Our Lady of Salvation, created by the French National Pilgrimage. It was therefore on the basis of these models, as well as that of the Hospitallers of St. John of Jerusalem, that, on Tuesday 18th August 1885, the 7 founding members of the Hospitalité Notre-Dame de Lourdes, including Baron Dunot of Saint-Maclou, who would be their second president, made their engagement. They were responding to their belief to always see the sick, the poor and the pilgrims as “our Lords”. In 1886, Pope Leo XIII approved the institution of the Bureau of Medical Observations of Lourdes set up by Dr. Dunot de Saint-Maclou. The baron died on 10th September 1891. He was buried in the cemetery of the Lourdes chapelains, in the park by the bishop’s house. Successive presidents of the Bureau of Medical Observations of Lourdes still rely on his methods today. 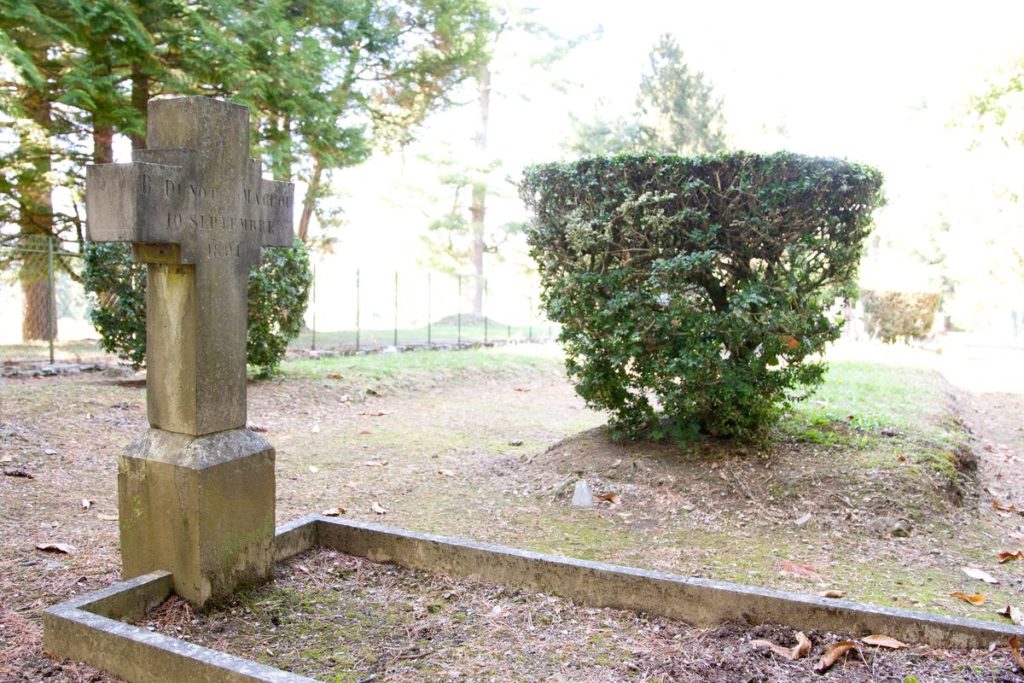 Reading this booklet reveals a fascinating and captivating part of the Lourdes story. Father Andrea Brustolon’s account is presented in a very precise, very rich manner which immediately lends the work a tone of truth and objectivity. Georges-Fernand Dunot of Saint-Maclou, the first president of the Bureau of Medical Observations of Lourdes, is shown very clearly to be a specialist not blinded by prejudices or naive faith. As Pope Francis wrote in Lumen Fidei: “Faith awakens the critical sense by preventing research from being satisfied with its own formulae and helps it to realise that nature is always greater.” (N° 34)