8th December 2020 The Feast of the Immaculate Conception

The Immaculate Conception means that Mary, the Mother of God, was preserved from all sin from the first moment of her conception, in her mother’s womb. Pope Pius IX proclaimed the dogma in 1854, four years before the “Beautiful Lady” of Massabielle introduced herself to Bernadette Soubirous on 25th March 1858 when she said, “Que soy era Immaculada Councepciou.” (I am the Immaculate Conception) 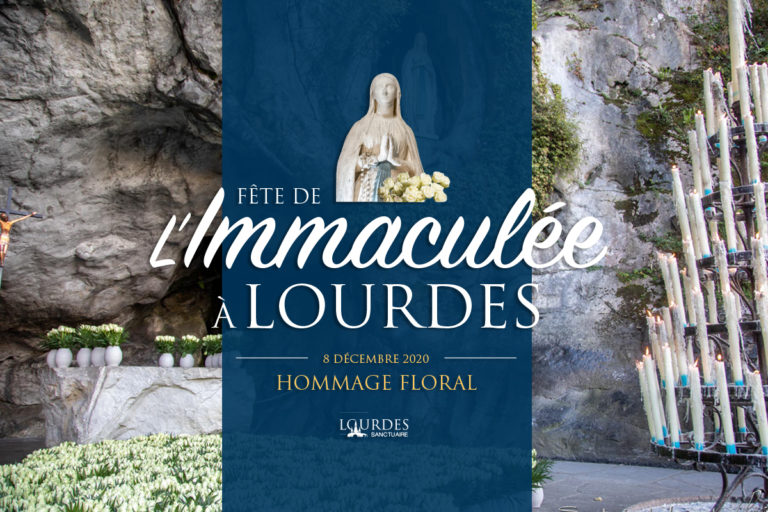 Programme of celebrations of the Solemnity of the Immaculate Conception

What does “Immaculate Conception” mean?

According to the Catholic faith, Mary is conceived without original sin. Some twenty years before the proclamation of the dogma by Pope Pius IX in 1854, through Saint Catherine Labouré, the Virgin Mary had given the Church the prayer, “O Mary, conceived without sin, pray for us who have recourse to thee.”
On 8th December 1854, the Pope proclaimed, “The Blessed Virgin Mary was, at the first moment of her conception (…) preserved immune from all stain of original sin.”
On this day, members of the Church contemplate, in Mary, the perfect success of humanity as desired by God. This feast day is celebrated on 8th December.
“In the Gospel of the Annunciation, the Angel’s greeting to Mary resounds: “Hail, full of grace, the Lord is with thee”, (Luke 1:28). God has always thought of her and wanted her in his inscrutable plan, to be a creature full of grace, that is, full of his love.
Perfectly conforming to God’s plan for her, Mary then becomes the “most beautiful”, the “most holy”, but without the slightest shadow of complacency. She is humble. She is a masterpiece, whilst remaining humble, small, poor. In her is reflected the beauty of God, which is all love, grace, the gift of self. (Pope Francis, 8th December 2019)

Lourdes and the Immaculate Conception

After the apparition on 25th March 1858, Bernadette went from the Grotto directly to the presbytery: she wanted to tell the parish priest, Father Marie-Dominique Peyramale, the name that the Lady had given her but which she did not understand. On the way, she repeated the words so as not to forget them. Entering the presbytery, she said in the Bigourdan dialect, “Que soy era Immaculada Councepciou” (I am the Immaculate Conception). Father René Laurentin, historian of Lourdes, recounts the parish priest’s reaction. “The rock that was Peyramale reeled from the shock, it lost its footing. The weapon of his authority which he bore in the service of good, abandoned him. From the depths of his heart and his chest, a tide rose up and overwhelmed him. What surfaced were the sobs…”. It was undoubtedly at this time that the parish priest of Lourdes was convinced that the apparitions of the Virgin to Bernadette were authentic.