Another illustration of the year theme “Happy are the poor”, an exhibition on Saint Benedict Joseph Labre will be staged from 11th February 2019, in the premises of the Hospitality of Our Lady of Lourdes (Accueil John Paul II). You will be able to explore the life of the patron saint of the hospitality, beggar and pilgrim, and his link with Lourdes and Bernadette.

Benedict Joseph Labre, born on 26th March 1748 in Amettes, diocese of Boulogne-sur-Mer (north of France) and died on 16th April 1783 in Rome, was a French beggar pilgrim who travelled the pathways of Europe. Nicknamed the “Wanderer of God”, he unsuccessfully tried repeatedly to enter monastic life. The Abbot of La Grande Trappe de Sept-Fons would not accept him either and saidto him, “God wants you elsewhere” He then set out for a perpetual pilgrimage, with God alone as his companion. For seven years he travelled all over Europe, from sanctuary to sanctuary. He shared the lives of the homeless, in extreme poverty. Rome was his favourite place. He sheltered in the ruins of the Colosseum where he shared everything that was given to him with the poor. He was found, dying, on the Wednesday of Holy Week. As soon as news of his death was made known, the children and the people of Rome left the streets of Rome shouting, “The saint is dead!” Miracles attributed to him multiplied. Benefiting from a precocious and popular hero-worship, he challenged the materialism of a society dedicated to money. He is the patron saint of the homeless, poor and excluded. Beatified by Pius IX in 1860, he was canonised by Leo XIII on 8th December 1883.

You can see the statue of Saint Benedict Joseph Labre in the Sanctuary, near the Abri Saint-Michel where the Hospitality of Our Lady of Lourdes can come to eat. Unveiled and blessed on 10th June 2012 by Bishop Jaeger of Arras (France), and Bishop Brouwet, Bishop of Tarbes and Lourdes, it was presented to the Hospitality of Our Lady of Lourdes of which Benedict Joseph Labre is the patron saint. The statue was carved from Belgian stone by a sculptor from Pas-de-Calais. 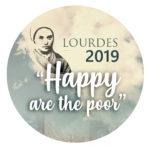 This year, during the Lourdes February Days, from 8th – 11th February, the sanctuary proposes meditating on our poverty (write on the form provided for this purpose). On this occasion, Saturday, 9th February from 9pm (Church of St. Bernadette), Bishop Jean-Claude Boulanger, Bishop of Bayeux-Lisieux (France), will introduce us to the story of this “wanderer of God” who, like Saint Bernadette, knew “the secret of joy”. In February Father André Cabes is publishing the Lourdes Catecheses to experience a year with Bernadette. He invites us to examine the “paradoxical link between poverty and happiness.” The Rector of the Sanctuary also leans on “the figure of this other saint of Lourdes, patron of the Hospitality, Benedict Joseph Labre, the beggar saint … He would not have exchanged his place for all the gold in the world.“ 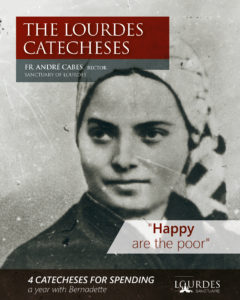 The Prayer of St. Benedict Joseph Labre “Jesus is with us!”